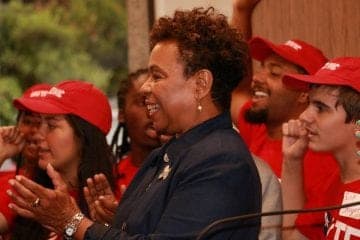 The History of the Freedom Center – Barbara Lee

To our Martin Luther King Jr. Freedom Center young people and staff, I just want to say ﬁrst how proud I am of you, good to be, good to see you. You all are awesome and you have interpreted your experience not only in the context of what you have seen and witnessed and felt, but what we now know is what we have to do– through you– and so it really is remarkable to see so many of you and to hear what you’ve, about what you’ve learned this summer.  But also what you gave this summer. And we have to continue to move forward and bring the Martin Luther King Jr. Freedom Center to an even larger scale. And so I want to thank our sponsors also and those who support the center because this is an important, important organization.

I want give you a just a bit of brief history because Elihu Harris was so much a part of this history and it won’t take long. This starts in the mid-nineties.  We were at then the East Bay Regional Park and it was a Martin Luther King March and Rally initiative. It was during a Martin Luther King birthday march and rally that something hit me, and I just said “look we need to change this to the Martin Luther King Regional Park, it shouldn’t be East Bay Regional Park”, so we worked with the park district, Doug Siden, and moved forward and we renamed the park.  But during that speech, or after that speech, I think it was, Ira Jenkins or Charlie Mae Davis, two of our wonderful founders of the center– we were all talking about the state building that was being built.  The Elihu Harris State Building downtown, and they asked, what are we going to do in east Oakland? We want something in East Oakland. To which I said “well, let’s set up a Martin Luther King Freedom Center in East Oakland.”

And so out of that day this is what was created. And we put together legislation – it was actually legislation that established a Memorandum of Understanding. It was then Pete Wilson, Republican Governor, and it was a Memo of Understanding between the City of Oakland, the East Bay Regional Parks District, I believe the Port of Oakland, the Coastal Conservancy, and at that time I was in the Assembly in the State of California. We put that together to put it on the books as a State sanctioned center. What happened though that process, and it was really quite amazing that Ira Jenkins, Mr. Hicks, Charlie Mae, decided that they were going to talk about civic engagement and have people come to Sacramento and testify on the bill and why this bill was so important.

And so busloads of my constituents came to Sacramento. They came to a committee hearing, ﬁlled the the hearing room and really presented testimony about what we wanted to do, and what our vision was.  They spoke about our vision to establish a center for violence prevention and mediation, conﬂict resolution, a center that would honor and respect the environment and study nature, have nature studies, environmental studies, a center that would look at all of our great civil rights leaders, foot soldiers and leaders of the movement, a center that would really bring all of this together and educate our young so that our young people during High School could move on to college or wherever they were going to go, to work or whatever in terms of their future that they would have this as their background.  And this will be part of who they are.

And, and I just have to say that the Martin Luther King center has withstood the test of time.  There are very few organizations that last so long, and I credit this to the vision, and to our young people, and to this community because in spite of the fact that it is very difﬁcult to raise money and to keep everything going, somehow we have been able to do it. And so, Sandra Andrews is here, and I want to thank you because she has been on the board, helping to keep this going and the young people, their future is so promising. Not only in terms of who they are and what they become, but also what they contribute back to the community and how they branch out.

I recently gave a speech. I had to speak to the students at American University in Washington, DC and one of the young people who had gone with me on a pilgrimage–we do this every year, the Civil Rights Pilgrimage to Montgomery, Selma and Birmingham, Alabama, which is really awesome, bringing our young people to meet Congressman John Lewis and many of the heroes and sheroes and foot soldiers of the civil rights movement. I ran into this young lady, she said “do you remember me?” I said “Yes, I remember you are from Alameda. You went with us on the pilgrimage.  And their she was at AU and she came to the speech where–I don’t know how I got to AU in the middle of votes– but I raced over to make this speech with the students.  And there she was. She was explaining to the students about the Martin Luther King Jr. Freedom Center and the importance of the center in her life. I mention this just so you know that what you all are doing and what you’re bringing to yourselves and this community really and how it has ripple effects.

All of my colleagues in California are really jealous of me because of you. Because of you and it’s a very important moment in civic engagement.  I serve as a member of the Civic Engagement Task Force and I try to explain to my colleagues what the Martin Luther King Jr. Freedom Center is engaged in, so that they can kind of step out of the box and understand civic engagement is more than just what is taking place and what they’re doing.  It means really raising the level of consciousness among young people, it means educating young people, it means helping young people gain the experiences that are needed, it means a lot. And also helping them put into action what they learn.

For example, we have the Martin Luther King Lecture Series, it’s Elihu Harris and Barbara Lee Lecture Series, that has emerged out of the center and you know we have DVDs and I show them to my colleagues.  They cannot believe that our young people are organizing this, and what we do.  When we meet people in the South or wherever who have been involved in movements, we bring them here to Oakland. You all, many of you have come to these lecture series and we have hundreds of people who come out.

For example, one which was on C-SPAN. Our young met all of these people in Montgomery, we had Donzaleigh Abernathy, the niece of Reverend Ralph Abernathy, we had Carey Kennedy, the daughter of Bobby Kennedy, we have Peggy Wallace, who’s the daughter of George Wallace, the segregationist, who has had an unbelievable revival in terms of her consciousness and the work she is doing. And we have Luci Baines Johnson, the daughter of President Lyndon Baines Johnson. We had them on the stage, and students did this and it was called, Daughters of the Civil Rights Movement. C-SPAN covered it and we had it downtown and it was really quite amazing to hear these women talk about what was taking place during their life with their families, with their mothers and their fathers.  And so I, of course, showed it to my colleagues and who asked, how can we do this? And I get to say, well you guys gotta understand this work!

And so I share this example, that because the work of this center, which is so important in terms of, not only my district and my community, but how it’s really translating throughout the United States and throughout the world. We have some other plans for some international work very soon because I travel, as you know, on the committee that funds all of our foreign assistance and USAID and our international work. So I have the opportunity to travel everywhere in the world and I always run into young people who are doing amazing things and I think about you guys. And so I say “Look, how can we get the Martin Luther King Jr. Freedom Center young people to connect with you”.  So we have a couple of other international things going on and we’ll announce sooner or later.  I say this so you know we have an international perspective.  An international connection, and I want you young people to know you also are well known throughout the world.

And so again, you make me proud.

And so I want to close by reading a couple of things Dr. King said.   In 1959, Dr King wrote, “We must rise above the narrow conﬁnes of our individualistic concerns to the broader concerns of all humanity”.  You heard that this morning right?  You heard that this morning and you know Dr. King led boycotts and marches and rallies in nonviolent political action and that’s what we are witnessing here with our young people.

They register voters so that they can become empowered to make their decisions about their communities, laws, and their leaders.  You all have listened to people to understand what our people need and what they are experiencing. And I listen to you because this helps with me with my overall political and policy agenda.

We created the center to empower young people to recognize that they have the capacity to be the ones to demand change and that is exactly what  they are doing. I’ve seen them do this over, and over ,and over again. It is a real testament to the curriculum and to what Karen and Roy have put together and to the Board and how they really get it! You know, they are “Woke”. They’ve been woke a long time in terms of young people. I am constantly inspired by you. You give me a lot of hope and you’ve given me a lot of energy. I really think that we need this, given what we know with 45 in the White House right now.  These young people will not let this administration do the damage that it’s trying to do.  Because they are woke, they’re engaged and we’re going to ﬁght back. They know that they’ve got to ﬁght back because we have made tremendous progress in terms of human rights. But we have a long way to go. And, in fact, they’re trying to turn the clock back– but our young people understand– we’re not going back–at all.

Finally Dr. King said in his letter from the Birmingham Jail, where you know he was in prison for coordinating peaceful marches, he was arrested.  And the sit ins to protest segregation and he said that  freedom is never voluntarily given by the oppressor.  It must be demanded by the oppressed. So that’s what all of you are doing.  And we recognize you, and we thank you all.

Your email address will not be published.
Required fields are marked *