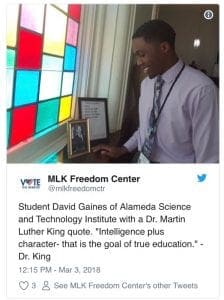 A group of Oakland-area students this weekend stood alongside major civil rights figures as part of the Faith and Politics Institute Congressional Civil Rights Pilgrimage tied to the anniversary of “Bloody Sunday.”

Rep. John Lewis (D-Ga.), who was among those beaten on the Edmund Pettus Bridge in 1965, asked the students for the first time to play an active role in the events by giving speeches and presentations.

“Especially as a young person, we don’t get this type of exposure just in school,” Laelah Jackson, 16, of Berkeley said in an interview.

David Gaines, 17, of San Leandro, marveled at the chance to hear the firsthand stories of pivotal moments in the civil rights movement.

The students spent three days sitting for meals and riding a bus with 29 members of Congress on a trip that began in Memphis at the National Civil Rights Museum at the Lorraine Motel, where King was shot nearly 50 years ago. It ended walking across the Edmund Pettus Bridge to commemorate the 53rd anniversary of Bloody Sunday

Rep. Barbara Lee, an Oakland Democrat who helped found the Freedom Center, has been taking students to the march for years.

Lee said her first experience with an annual congressional trip to historic civil rights sites in 1998 made her realize she hadn’t fully processed what it was like to grow up black in Texas during segregation. She’s attended nearly every year since and soon started bringing a handful of Oakland-area high school students along.

“I want some of them to feel and see what I’m seeing,” Lee said.

Karen Bohlke, director of government and external relations of the Freedom Center, said several members of Congress asked how students from their districts can be included in the future. 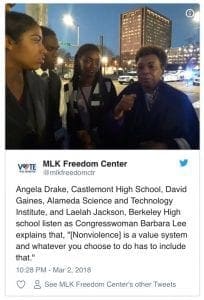