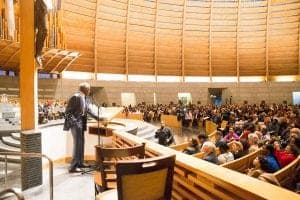 How do we think globally and act locally?

What seemed to be the most complicated question asked by Representative Barbara Lee of keynote speaker, actor and activist Danny Glover at last night’s Barbara Lee and Elihu Harris Lecture ultimately found two, surprisingly simple answers: think like a circle and walk backwards to leap forward.

Of course, before tackling those ideas, it’s important to know that Glover’s response was highly nuanced and came with specificity that drew attention to the worldwide, marginalized communities with whom he works. The San Francisco native, acclaimed for his performances on television and in classic films like The Color Purple, Witness, Places in the Heart and the Lethal Weapon series, has served as a Goodwill Ambassador for the United Nations Development Program. He is currently a UNICEF Ambassador whose concerns are primarily economic and social justice issues and policies that impact Afro-descendants in the Americas, Cuba, Haiti and the Caribbean.

During Glover’s roughly 30-minute presentation, he touched on Dr. Martin Luther King Jr’s. words and legacy, gentrification, political truth, race and gender divisions, climate change, poverty, the widening wealth gap, public social spending and “the tangled web of challenges that all work together to maintain the status quo and in the process obscure the root causes of our oppression.”

People regardless of race, nationality, age, sexual orientation or other classification most sincerely desire and demand community, according to Glover. “And we know we need a culture of radical engagement and sustainable activism to achieve it.”

In the harsh, truth-telling light of Glover’s broadminded, sweeping address, there was a cautionary note to avoid becoming partisan or “single issue advocates.” Economic inequality—and yes, this included wealthy people of color—he said makes people “incredibly comfortable” and unlikely to push for social change. He highlighted dignity and quoted an excerpt from King’s book, Where Do We Go from Here: Chaos Or Community? The passage concluded: “No worker can maintain his morale or sustain his spirit if in the marketplace his capacities are declared to be worthless to society.” It was easy to feel overwhelmed by the dangers lurking, the risks of “getting it wrong,” the unexpected bias or unintended blindness that lurks even in humanitarian activism.

But there was hope found in turning the mind to interconnected circles drawn by Glover that thread the political fate of people in other countries to that of American citizens. Using Afro-descendant history in the United States and other countries as a trampoline for progressive change added linearity to his arguments that each person bears responsibility but can rest on the shoulders of past heroes and heroines.

To think globally and acting locally consider your circle. If it is large, like Glover’s, activism will include storming the halls of Congress to speak to government representatives about low income households with black or brown families disproportionately impacted by sky-high housing costs. Advocacy will extend to protecting human and civil rights in Haiti, Honduras, Costa Rica and beyond. If, like most of us, the circle is humble, it is no less worthwhile. Inspiring a neighbor to vote and providing transportation to a polling place is noble. Encouraging a young person to speak and learn about climate change, police accountability, economic inclusiveness, labor unions and other topics might cause a hesitant youth to become a bold leader. Deliberately and non-violently engaging with people who hold different ideas expands and enriches the discovery of solutions to our most vexing social problems. The key is to start. Just as the circumference of a circle begins with a simple, single point and ventures outwardly but always curves and returns to ‘home,” the size of activism aimed at justice is less relevant than its consistent path and overall, unwavering solidity of purpose.